How to make this vegan golden beet pasta sauce:

For this recipe, you just need 5 ingredients for the basic pasta sauce recipe. You can add crushed red pepper if you like a spicier finish, but it’s not required.

Here’s what you need:

For this recipe, I use fresh tomatoes which I boil, remove the skins, and then hand-crush. You can use a can of diced or whole-peeled tomatoes instead if you prefer.

First, start the sauce. Cook a diced onion in a little oil and then add small-diced golden beets and cook until just beginning to soften. Add the thyme and then reduce heat to low and let them cook in the pot as you prepare the tomatoes.

As you cook the golden beets, bring a big pot of water to a boil. You’ll cook both the tomatoes and the pasta in the same water!

Once the water is boiling, add the tomatoes and cook until their skins split. Transfer to an ice bath and then peel and remove the cores. Crush the tomatoes with your hands.

From there, simply add the tomatoes to the sauce and season with salt and pepper. Bring to a boil and then reduce heat and simmer and add the chopped kale.

This golden beet recipe is really that easy! 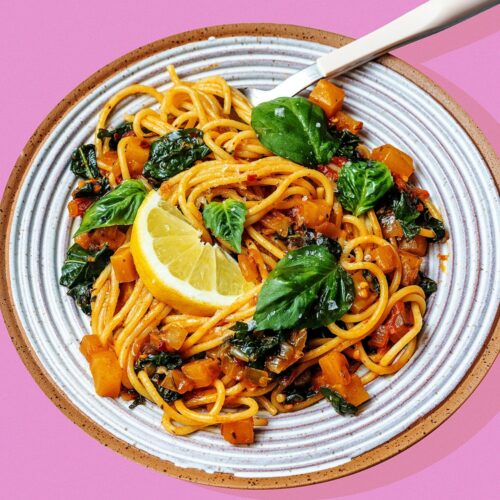 Go to a random recipe